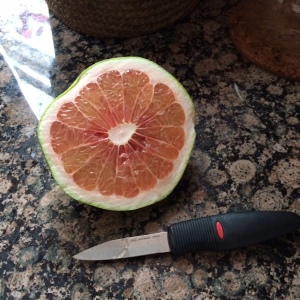 I confess to having a strong urge to try new foods, or at least foods new to me. The other day at the grocery store, I saw a pummelo. At first I thought it was a green grapefruit, but upon further inspection it was something I’d never had before, so I bought it and brought it home. It’s such a big, heavy fruit it was a bit like bringing home a small bowling ball.

As is often the case with fruit I’ve never eaten, YouTube showed me what to do with it. Pummelo, as you can see in the picture above, has a very thick rind. The white casing isn’t edible like it is in an orange so you have to discard it, but the fruit inside is firm and delicious. It’s sweeter than grapefruit but otherwise has a somewhat similar flavor.

According to Wikipedia, it’s one of the original four citrus fruits. As a result it has more and larger seeds than I’m used to seeing. Unbeknownst to me, we regularly eat hybrid citrus fruit. Although apparently the grapefruit is a naturally occuring hybrid between pummelos and mandarins, which turns out to be a delicious love story.

If you haven’t tried a pummelo, do so, you won’t be disappointed.

This site uses Akismet to reduce spam. Learn how your comment data is processed.